skip to main | skip to sidebar

It was our inaugural show in 2003 with a slightly different line up of people - Nicole, Vivian, Lilian, Wei Na, Soon Yoon and Neal.

It wasn't a full-on acapella show, so some songs were accompanied by the amazingly talented Zal and Jerral on guitar and percussion. They were exactly what we needed looking at our extremely varied repertoire for the night. We weren't kidding when we said Multiple Zones. 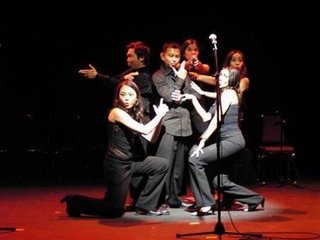 From showtunes like "James Bond" to Michael Jackson's "Thriller", a bossa "Boy From Ipanema" to a swingy "It Don't Mean A Thing", and a tribal-like "Kayama" to 80s pop "Freedom 90", it had quite abit of everything. 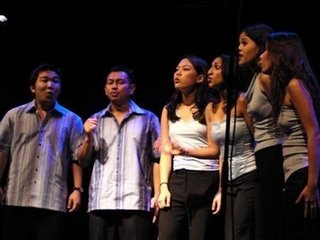 Personally, it was the first public performance for me and I was a nervous wreck. Knocking over my guitar and all (so embarassing la). But it was fun. Really fun.

Since then, our gigs have been mostly private ones, namely weddings and more weddings, and the odd show or back up vocals. We hope to stage another show next year (2007). We'll see how that goes.

But first, our Christmas gig at Bangkok Jazz.
Whoop-ee. 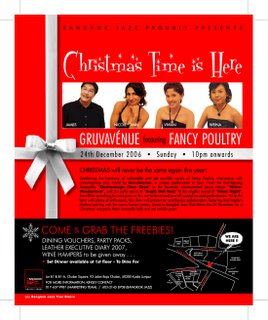 Fancy Poultry
We are a singing group that experiments with A Cappella sounds as well as songs with music accompaniment. Available to perform for weddings and all sorts of private functions. Contact us at fancypoultry@gmail.com